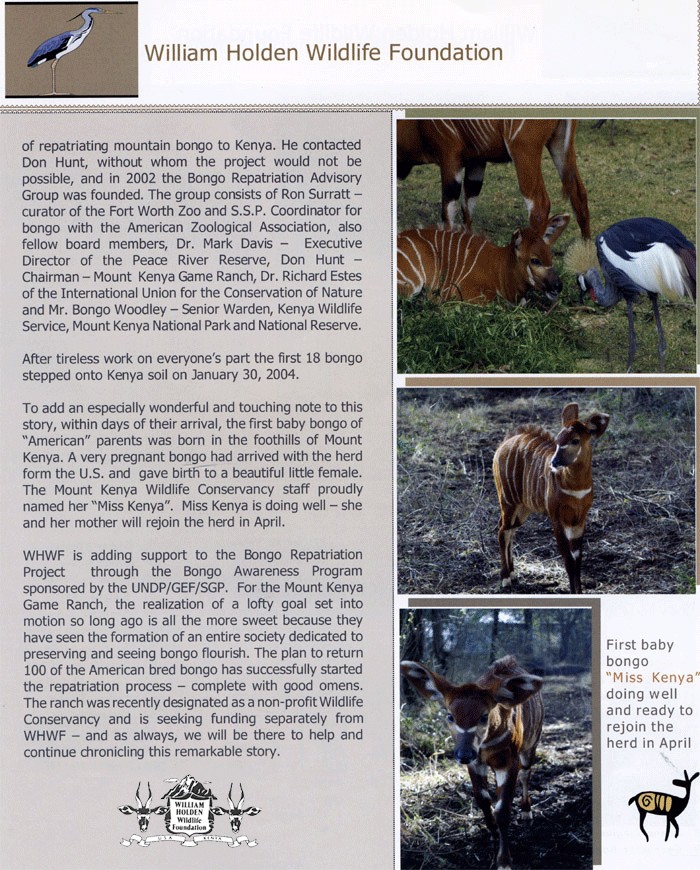 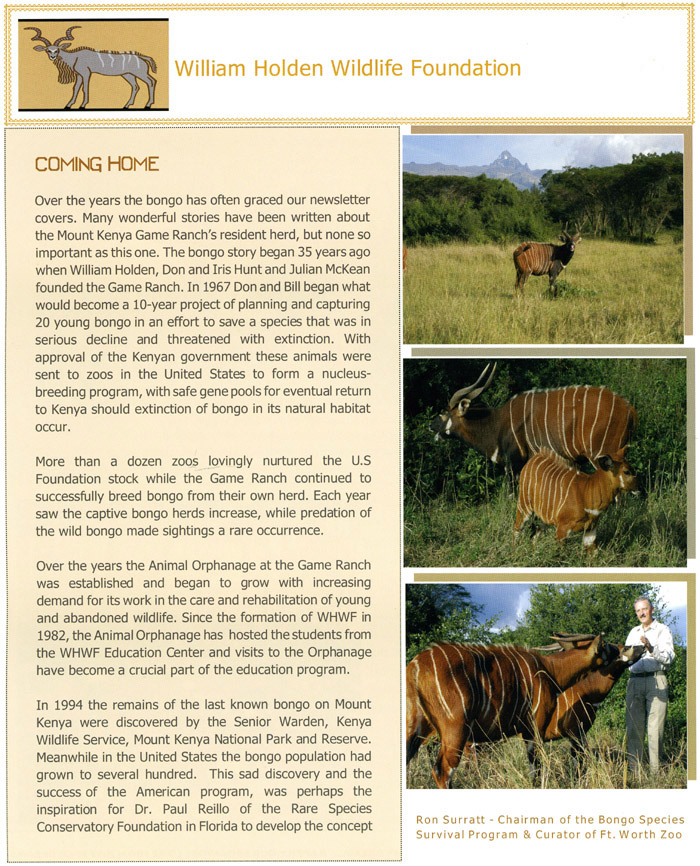 The Mt. Kenya ecosystem is a world heritage site and the forests of the mountain once contained an abundance of wild species, most of which are now endangered or in the case of the East African Bongo, extinct due to human activity, poaching and logging.

The success of this Bongo Awareness Program, funded by the WHWF, depends on the support and commitment of the people of Kenya to ensure security and protection of the bongos, of other wildlife and of the habitat.

In 2000 the Association of Zoos and Aquariums (AZA) recognized the diversity of Bongo sub species and formed a species survival plan, to improve genetic diversity of captive and managed populations. Through the efforts of zoos and private collections in North America, in concert with the Kenya Wildlife Service and the Mt. Kenya Wildlife Conservancy, a permanent plan was hatched that came to fruition in 2022.

Early in 2004 the White Oak Conservancy in Florida, a privately owned and funded conservancy, received 18 Bongo from North American zoos to hold and care for until arrangements could be made to transport the animals to the Mt. Kenya Conservancy in Kenya. Since then many dedicated conservationists have been working to realize the dream of a reintroduction of an extinct species to its natural habitat. Making a dream into a reality requires knowledgeable people on the ground in Kenya with experience in managing captive herds of wildlife species as rare as the Bongo. The only person with this experience was William Holden’s partner in the game ranch, Mr. Don Hunt. Since 1969 when Don and Bill captured a collection of not so endangered Bongo on Mt. Kenya to enhance breeding programs in zoos in North America, safe from poachers, they also kept a small group at the game ranch / conservancy where they happily adapted and bred. The Bongo herd at the MKGR / conservancy was the only captive herd in all of East Africa, thus the ideal location for the zoo bred Bongo to safely transition to life in East Africa. The MKGR received 18 imported Bongo that were released into a large fenced pasture land on the ranch. After a few years some of the resident Bongo were released into the pasture with the remaining imported Bongo and began to breed successfully.

It was up to the WHWF to create a Bongo awareness education program that would reach the human population who worked and lived within the nation park of Mt. Kenya, mostly in the forests which is the ideal habitat of the Bongo. If the dream of releasing Bongo was going to become successful the future of the animals was in the hands of the human residents so we needed to reach them with the news of the potential release and how important it was for them to join in the effort to preserve this extraordinary species. The Bongo Awareness Program conducted by the WHWF education staff took place over a three year period reaching approximately 30,000 people with the message of conservation and preservation.

In March of 2022 five Bongo were released into an 800 acre area of protected forest.